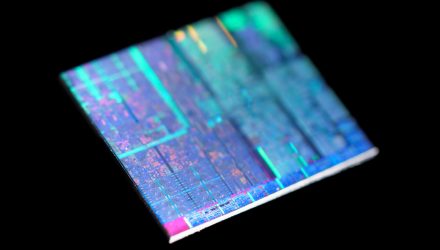 Shares of Intel Corp slipped 1.4% on Monday due to an analyst downgrade, helping to bring the Dow Jones Industrial Average into the red by over 60 points in the early trading session before the Dow staged a rally to go up over 60 points of 1:00 p.m. ET.

ETFs with Intel shares were started on the downside, but are not up–Direxion Daily Semicondct Bull 3X ETF (NYSEArca: SOXL)–up 0.67%, ProShares Ultra Semiconductors (NYSEArca: USD) is up 0.07% and VanEck Vectors Semiconductor ETF (NYSEArca: SMH) gained 0.13%. The drop in Intel came as a result of Barclays lowering its rating of Intel to equal weight from overweight, citing that the chipmaker needs to evidence that its next generation of chips will outperform those by rival chipmaker AMD.

“We see risk of moderation in PC/server end markets, which have already outperformed, while the storyline is hampered by much uncertainty remaining around competition, process nodes/roadmaps, as well as the new CEO,” said analyst Blayne Curtis. “Intel continues to believe that it can retain a performance advantage even with a process node disadvantage, but has provided little evidence to support this, creating an overhang well into 2019.”

Curtis lowered his price target for Intel shares to $53–$9 less than his original estimate. Just last month, Intel said it will be releasing its 10-nanometer chips prior to the holidays in 2019 versus AMD’s 7-nanonmeter offering that will already be available later this year.