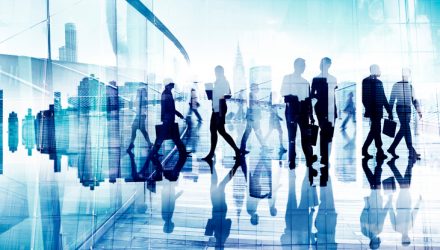 Capitalizing on the robust liquidity and intra-day tradability of ETFs, institutional investors have utilized the investment vehicle to quickly move in and out of the markets.

According to a survey of 210 global institutions conducted by Risk Magazine and commissioned by Jane Street, around 30% of institutions traded ETFs more than 50 times a month, reports Philip Stafford for the Financial Times.

Around 42% of institutions in Europe traded ETFs more than 50 times a month, and over half of Asian fund managers say they traded ETFs 10 or fewer times per month. U.S. investors also executed ETF orders in a similar fashion to allocate assets.

The average institutional investor allocated 19% of assets to ETFs. Furthermore, many institutions eschewed conventional means of trading ETFs, opting to  conduct off-exchange trades via brokers whom supplied investors with a quote for trading on request, which may not be all to surprising given the size of the trade orders.

About 41% of respondents said they traded using so-called risk pricing where an asset manager will pay a higher price to a market maker to take on and move large trades so as the trade does not affect the market price. Institutions used this approach to make quick trades, and the method was favored by 44% of U.S. institutions. A little under half of those surveyed indicated they traded in sizes less than $25 million , with just over a fifth traded in sizes over $100 million.