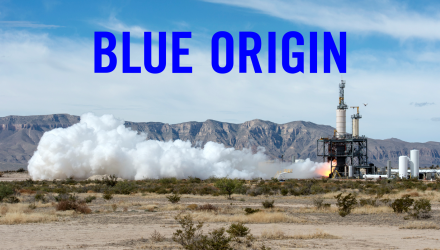 Jeff Bezos has had a career hallmarked by ambition and innovation. In 1994 at 30 years of age, Bezos quit a lucrative job on Wall Street and founded Amazon, which initially launched as an online bookstore which he hoped would capitalize on the Internet’s rapid growth at the time.

Today, Amazon has grown to be king of the retail ecommerce space, with a market cap value of $889 billion. Amazon’s massive success has made Bezos the wealthiest man in the world, with a net worth of approximately $151.7 billion, according to Forbes World’s Billionaires list.

Alongside Amazon, Bezos has served as the CEO of Blue Origin, a private aerospace company which the ecommerce mogul started in 2000. Last year, Blue Origin accomplished the first ever rocket flight in which the rocket was capable of flying back to Earth from space and landing upright, as if it were ready to launch again.

“When you look at expendable rockets today, the cost of propellant is only about 1 percent of the cost of the mission,” Bezos says. “The big costs come from throwing that aerospace-grade hardware away.”

By drastically reducing flight costs with the reusable space rockets, Bezos has ambitious goals in mind for the future of Blue Origin. Over the past three years, the company has hired hundreds of engineers, with plans to double its current workforce to around 3,000 employees, sources told Reuters. The urgency focuses on launching a rocket named New Glenn, a heavy-launch vehicle which Bezos promises will be able to haul satellites, and, eventually, people into orbit. Bezos said that New Glenn’s initial launch is slated to take place within 2020, a timeline which sources familiar to the company believe is unlikely.