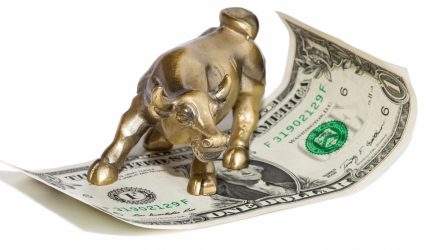 Will Rising Inflation in Japan Fuel This Bullish Dollar ETF?

Inflationary pressures in Japan could be a harbinger of what’s to come for the rest of the world, which could support the case for more bullishness for the U.S. dollar.

“Japan’s inflation expectations have now increased to the highest level in three years,” said Giles Coghlan, chief currency analyst at HYCM. “Japan’s 10-year break-even rate has climbed to its highest level since 2018 this week. It has been the weakness of the yen and the combination of rising energy prices, supply chain costs, and rising raw materials which have all been supportive of higher inflation.”

The effects of inflation on Japan aren’t necessarily an isolated situation, according to Coghlan. They could be a sign that stagflation, marked by rising rates and low economic growth, could be forthcoming.

“If inflation is coming to Japan, it is coming everywhere,” Coghlan wrote. “It looks like a more stagflationary environment is brewing. Stagflation is defined as high inflation, but low growth. It tends to favour gold, TIPS, the dollar and consumer staples. It is too early to say this is high conviction. However, it is a growing risk that is increasingly being spoken about.”

ETF investors erring on the side of greenback strength can look to the Invesco DB US Dollar Bullish (UUP) to capture this potential momentum. UUP tracks the price movement of the U.S. dollar against a basket of currencies, including the European Union’s euro, the Japanese yen, the British pound, the Canadian dollar, the Swedish krona, and the Swiss franc.

The fund is up 4% as gold continues to be stuck in somewhat of a perpetual holding pattern under an $1,800 price level. This is evidence of the strength in the U.S. dollar after the fund was down 7% in 2020 during a pandemic-ridden year.

An ETF Hedge Against Inflation

ETF investors who want to add a touch of diversification to hedge against inflation can also add gold. One such ETF from Invesco to get precious metal exposure is the Invesco DB Gold (DGL).

DGL seeks to track changes, whether positive or negative, in the level of the DBIQ Optimum Yield Gold Index Excess Return™ (DBIQ Opt Yield Gold Index ER or Index) plus the interest income from the fund’s holdings of primarily U.S. Treasury securities and money market income, less the fund’s expenses. The fund is designed for investors who want a cost-effective and convenient way to invest in commodity futures.