You are at:Home»Innovative ETFs Channel»Use This ETF for “Dogs of the Dow” Exposure 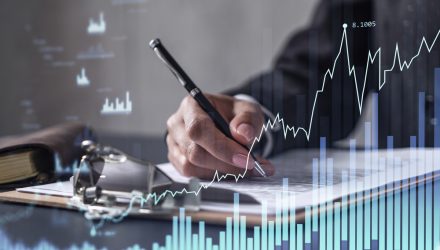 Use This ETF for “Dogs of the Dow” Exposure

It’s that time of the year again: Time to look at the 10 stocks that will be the next year’s “Dogs of the Dow” and exchange traded funds that can help investors embrace these stocks without having to shell out capital for 10 different stocks.

As seasoned dividend investors know, the “Dogs of the Dow” theory is easy to understand and put into practice. It’s based on buying the 10 members of the Dow Jones Industrial Average that have the highest dividend yields at the end of the year, on the basis that those names have the potential to outperform in the year ahead.

One way of effectively putting that plan into place is with the Invesco Dow Jones Industrial Average Dividend ETF (DJD). DJD follows the Dow Jones Industrial Average Yield Weighted Index, which is the yield-weighted equivalent of the standard Dow. Due to its emphasis on dividends, DJD doesn’t hold all 30 Dow stocks. Cloud computing giant Salesforce.com (NYSE:CRM) doesn’t pay a dividend, so it’s not on the DJD roster.

Still, DJD is an effective avenue for accessing the dogs of the Dow while defraying some risk and bolstering income.

“They’re dogs for a reason, but when you have these great companies with incredibly long and stellar track records, they have bumps along the way but can respond,” said Kevin Simpson, founder and chief investment officer of Capital Wealth Planning, in an interview with CNBC.

When it comes to DJD, investors should remember that the dogs are ranked by their dividend yields at the end of a year. For its part, the Invesco ETF weights holdings by “their 12-month dividend yield over the prior 12 months,” according to the issuer.

Even with the absence of Salesforce and its emphasis on yield, DJD is performing mostly in line with the traditional Dow Jones Industrial Average this year, and the Invesco ETF yields 140 basis points more than the standard iteration of the Dow.