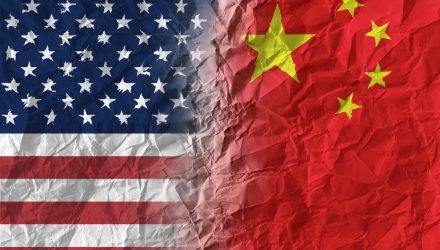 U.S. markets and stock ETFs rebounded Tuesday from one of their worst days of 2019 after President Donald Trump signaled the U.S. and China were edging back to the table.

The markets were assuaged by reconciliatory comments from both Beijing and Washington D.C., Reuters reports.

“We’re seeing trade optimism from semi-market friendly tweets from Trump. If we’re still talking then it means that a deal could be done soon,” Jerry Lucas, senior trading strategist at UBS Global Wealth Management, told Reuters. “We’re in a highly uncertain period right now, and the market is going to oscillate between good and bad days.”

In a series of tweets early Tuesday, Trump suggested the two countries could come to a truce in the near future. Meanwhile, China said it will keep talks going as Trump said he would talk with his Chinese counterpart at a G20 Summit in June.

The global equity market previously plunged on the prospect of lower economic activity due to an an all-out trade war between the U.S. and China. The S&P 500 retreated more than 4% off its all-time on May 1 in response to the recent escalations in tariffs between the two countries.

“Any continuing uncertainty is bad for the economy and markets,” Divya Mathur, a portfolio manager at Martin Currie, a U.K.-based asset manager owned by Legg Mason, told the Wall Street Journal. “It’s very important we come to a deal.”

However, Kit Juckes, global strategist at Société Générale, warned that Tuesday’s gains may be short lived as the underlying problems have not disappeared.

“I wouldn’t place too much faith that the current mood improvement is going to last all that long. Still, it can certainly last for a day or two,” Juckes told the WSJ.