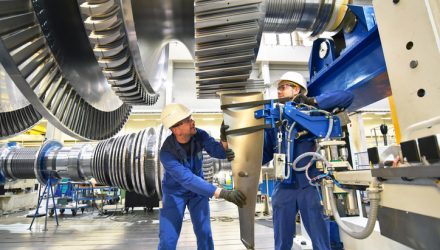 U.S. markets and stock ETFs declined Tuesday as lackluster manufacturing data raised concerns over the health of the economy and the growth outlook.

According to the ISM report, U.S. factory activity shrank for the second consecutive month in September to a worse-than-expected 47.8, its weakest in over a decade, fueling fears of a worsening fallout from the protracted U.S.-China trade war, Reuters reports.

“All of a sudden we got the ISM data and it was below 50, and that whole narrative changed,” Daniel Morgan, vice president and senior portfolio manager at Synovus Trust, told the Wall Street Journal. “Everything now seems to be orbiting around the manufacturing data, which unfortunately reinforced data we had coming out of Europe last week, specifically Germany, kind of pointing to this global slowdown scenario, at least from the manufacturing.”

“The PMIs across the globe have continued to deteriorate and obviously we are in line with that deterioration. It’s all due to the trade war,” Peter Cardillo, chief market economist at Spartan Capital Securities, told Reuters.

However, Thomas Simons, a Jefferies economist, argued that the contraction is not a sign of a wider softening in the U.S. economy, since we have to also consider factors like Boeing Co’s production issues relating to its best-selling jets that have weighed on the manufacturing sector.

Investors will be watching out for the key jobs report on Friday to gain more clarity on the health of the economy and the trajectory of further growth.

Additionally, the markets will be closely monitoring developments between Washington and Beijing as the two sides are scheduled for high-level trade talks later this month, along with the upcoming third-quarter earnings season that will go into full swing int he weeks ahead.