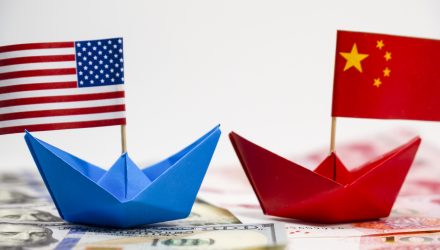 U.S. markets and stock exchange traded funds teetered Wednesday as investors looked to a pivotal round of trade talks between the U.S. and China after President Donald Trump said he would increase tariffs later this week.

Trump said he will raise tariffs on $200 billion worth of Chinese imports to 25% from 10% on Friday. China’s commerce ministry later said it would take retaliatory measures if tariffs are raised, Reuters reports.

“The market is trying to price in three potential outcomes: one is a deal being made, another is an increase in tariffs and the third is kicking the can down the road to keep negotiating,” Michael Antonelli, market strategist at Robert W. Baird, told Reuters. “Everyone will go into ‘tread water’ mode until Friday because why would you make any big decisions before then, when you can hear more about it on Friday?”

The escalating rhetoric behind the prolonged trade war renewed concerns of a global slowdown, dragging on global markets and halting the record run U.S. equities.

Markets, though, somewhat strengthened Wednesday on newfound optimism, following the president’s latest tweet, revealing China had “just informed us” that they are “now coming to the U.S. to make a deal,” the Wall Street Journal reports.

“It looks like markets are stabilizing,” Jeff Kravetz, regional investment director at U.S. Bank, told the WSJ. “That may be a sign that the recent selloff we had was a speed bump on the road to a longer-term trade deal.”

Meanwhile, the better-than-expected earnings season has done little to assuage the trade-induced, risk-off selling. First quarter profits are now seen to rise 1.2%, compared to the previously projected 2.3% decline at the start of the season.