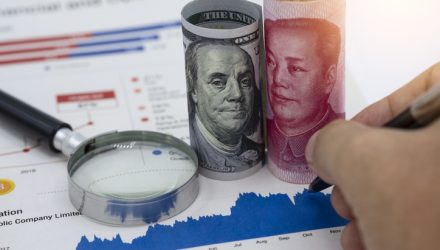 U.S. markets and stock ETFs rebounded after U.S. President Donald Trump said talks with China were going “very well,” allaying some of the prior fears that a deal would be delayed.

Analysts argued that markets are putting hopes on an initial accord being hashed out between the U.S. and China as U.S. negotiators anticipate a phase-one deal with China to be completed before the mid-December scheduled tariff hikes, the Wall Street Journal reports.

“(The report) saying that White House officials are much closer to a trade agreement is what the market’s focusing on today,” Robert Pavlik, chief investment strategist, senior portfolio manager at SlateStone Wealth LLC, told Reuters. “Between now and Dec. 15, you’ll see more tough talk and you’ll probably see the president back off tariffs. But anything could happen.”

“If they delay (the Dec. 15 tariffs) and keep negotiating, the market could reach new highs,” he added.

The update on Wednesday was a stark contrast to events on Tuesday when markets sharply declined on concerns over a trade agreement in response to Trump’s tweets that hinted negotiations could extend into next year and past the elections.

“Trump has an election to fight and it would be good if he was making progress on the trade front,” Kallum Pickering, senior economist at Berenberg Bank, told the WSJ. “And you have this generic economic slowdown taking place in China, you have problems in Hong Kong,” which may act as incentives to resolve the trade war.

Meanwhile, economic data revealed a slowdown in employment numbers. The U.S. private sector added just 67,000 jobs in November, according to the latest ADP National Employment Report. In comparison, some economists expected a gain of 156,000. Looking ahead, Friday’s nonfarm payrolls report could provide a clearer picture on the labor market.