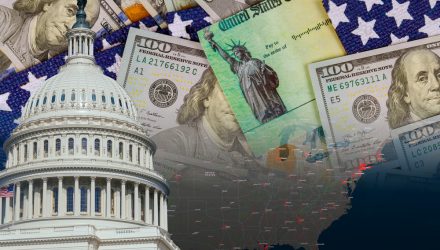 Technology stocks have been outperforming in recent weeks due to the increased reliance on digital devices in a new stay-at-home environment. Strong earnings results out of the tech segment, along with coronavirus-induced disruptions in traditional sectors, have helped widen the lead between Big Tech and the rest of the market, the Wall Street Journal reports.

“We expect to see that bifurcation in the market until we get some sort of solution for how to move past the virus issue,” Charlie Ripley, senior investment strategist at Allianz Investment Management, told the WSJ.

“A couple of weeks ago, U.S. cases were rising by 40-50% on a weekly basis. They’re now falling. Not as fast as they might appear, because testing has dropped, but they are still lower and so is the rate of hospitalization. Markets like that,” Ian Shepherdson, chief economist at Pantheon Macroeconomics, told the WSJ.

Further bolstering the risk-on mood, U.S. manufacturing activity expanded in July, an indication that the sector is recovering after the pandemic forced a shutdown in many sectors. The Institute for Supply Management’s manufacturing index was up to a beret-than-expected 54.2 last month, from 52.6 in June. Readings above 50 represent growth in activity.

Meanwhile, investors are waiting on policymakers to pass the next fiscal support fro the American economy. However, Democrats and Republicans remain in heated negotiations over a new relief package, which should include new aid to replace the 600-a-week boost to unemployment benefits that expired Friday.

“The slowness with which Washington is coming to an agreement on a fiscal policy shows some fatigue. A deal will likely come, but after some big fiscal cliffs have been passed,” James McCormick, a strategist at NatWest Markets, told the WSJ.