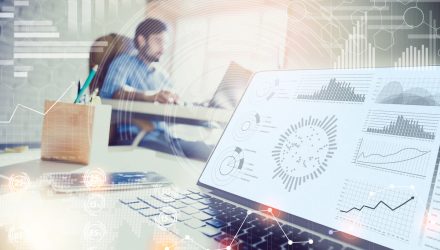 U.S. markets and stock ETFs climbed Friday, with the S&P 500 pushing toward record highs, as the earnings season helped the financial sector led the market.

“I think people were heading into this earnings season fearing the beginning of an earnings recession. The JPMorgan news has given them a little bit of hope,” Robert Pavlik, chief investment strategist, senior portfolio manager at SlateStone Wealth LLC, told Reuters. “I would liken it to someone drifting on a raft and seeing land.”

The Federal Reserve’s recent shift to a more patient stance on interest rate hikes has renewed concerns over the banking sector’s outlook. The S&P 500 financial sector has recovered some losses in the past week, but the segment still lags behind the broader index.

“It was a better-than-expected quarter for the banks, which was encouraging to see,” Carter Henderson, portfolio specialist and director of institutional development at Fort Pitt Capital Group, told the Wall Street Journal. “But I think that’s as good as it’s going to get for these big banks this year because in the first quarter they were still getting that tailwind from the last Fed hike in December.”

Coming up to bat, more big banks will announce quarterly results, including Goldman Sachs , Citigroup , Bank of America and Morgan Stanley. Health-care company Johnson & Johnson and the video-streaming platform Netflix are also up next.

Analyst now anticipate S&P 500 companies to experience a 2.3% year-on-year dip in earnings, or slightly better than the most recent projections of a 2.5% drop, according to Refinitiv data. Nevertheless, first-quarter profit is still expected to mark its first annual contraction since 2016.