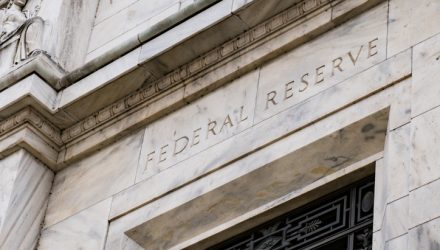 U.S. markets and stock ETFs pushed higher Monday ahead of another week of corporate earnings and new economic data that could help steer monetary policy outlook.

Investors are waiting on fresh economic data this week as the markets brace for interest rate cuts from major central banks. Traders will be watching for new-home sales and durable-goods orders on Wednesday and Thursday, respectively, the Wall Street Journal reports. Additionally, the U.S. Commerce Department will announce second-quarter growth figures on Friday.

“In the next six months we are looking for evidence that either ‘Goldilocks’ continues or we get greater evidence that the global economy is slowing down,” Paul Brain, head of fixed income at Newton Investment Management, the BNY Mellon subsidiary, told the WSJ.

Many are closely monitoring any new economic data as central banks like the Federal Reserve next week and the European Central Bank on Thursday update their monetary policies.

“Markets are struggling to hold early gains as investors start to fret about key upcoming central bank meetings. The main focus on an otherwise quiet day is what the ECB and the Fed will do,” Chris Beauchamp, an analyst at trading platform IG, told Reuters.

Money markets are pricing in a more than 50% chance of a 10 basis point cut in interest rates out of the ECB. Additionally, Fed officials will meet next week where they are widely expected to lower rates by at least 25 basis points or even enact a 50 basis point cut.

Meanwhile, the earnings season has kept markets steady on mixed reports. Major internet names will be reporting quarterly results, including Google’s parent Alphabet, Amazon.com and Facebook, among others.

Overall, second-quarter earnings for S&P 500 companies are expected to decline 2.1% year-over-year, according to FactSet.

“We need to see a pretty big improvement in corporate earnings to justify any further price appreciation from where we are right now,” Sam Stovall, chief investment strategist at financial-research company CFRA, told the WSJ. “Expectations for earnings growth is coming in softer than previously expected for next year and heading into 2020.”