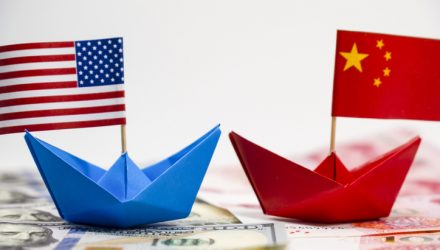 U.S. Stock ETFs Slip on Concerns Over the Global Economy

U.S. markets and stock ETFs pulled back on Monday after new data revealed the toll of an extended trade war on China, the second largest economy in the world.

Traders will be closely watching for economic data points as the economic calendar this week is filled with trade, politics and central-bank policy around the world that could affect the direction of markets.

“What happens this week decides what goes on from here,” Bethel Loh, a market strategist at ThinkMarkets, told the WSJ.

Trade remains a major focus point after data showed China’s exports unexpectedly declined 1.1% in November year-over-year, with shipments to the U.S. plunging 23%, according to China’s General Administration of Customs.

Lingering uncertainty over trade talks between the two countries has pressured global trade and the economic outlook for most of the year and contributed to heightened volatility.

Another round of trade barriers is scheduled to take effect Sunday on Chinese imports, but a commerce-ministry official said Monday that Beijing hopes negotiations with the U.S. will come to a “satisfactory” outcome. Some analysts anticipate President Donald Trump to push off new tariffs while negotiators still talking at the table.

“Avoiding a total breakdown remains the most important outcome for investors,” Geoffrey Yu, head of the U.K. investment office at UBS Wealth Management, told the WSJ. “Expectations are somewhat contained, so even if there is something before the 15th, it may not herald a new bull market or unleash an upswing in investment and/or GDP growth globally.”