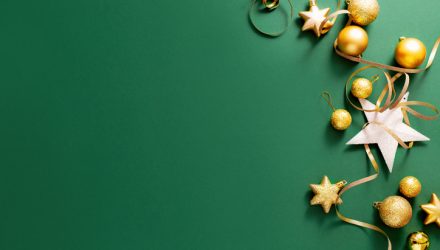 U.S. markets and stock ETFs were slightly lower Tuesday ahead of the Christmas as the back-to-back holiday rally began to peter out.

Markets were treading water Tuesday on thin trading volume as some investors appeared to be taking a break from the market’s record-setting rally ahead of the Christmas holiday, the Wall Street Journal reports. U.S. markets are open for half a day on Christmas Eve and closed for Christmas.

“It’s very thin volumes at this time of year, markets move on very small amounts of share trading,” Gerry White, chief investment commentator at Charles Stanley, told the WSJ. “General tones for next year are that things are looking a little brighter.”

“The mood’s a little choppier today than in recent days, but the recent rally has been pretty fast and furious,” Mark Heppenstall at Penn Mutual Asset Management, told Reuters. “The markets are probably just taking a bit of a breather.”

U.S. stocks are on pace to close out their best year since 2013 after the S&P 500 surged nearly 29% this year, following a dismal 2018 racked by severe volatility that sent broad indices into a bear market.

“There’s a little bit of a panic buying in the markets, which is the exact opposite of what was happening at this point last year,” Heppenstall added.

This year has been marked by improved trade developments between the U.S. and China as they worked toward signing an deal next month. Recession have more or less dissipated and most analysts believe the U.S. economy will continue to expand in 2020. Meanwhile, the Federal Reserve has shifted to a loosening monetary policy stance to bolster the economy after cutting interest rates three times this year.