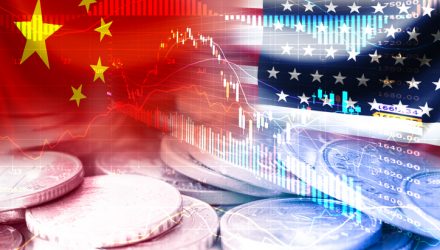 U.S. markets and stock exchange traded funds advanced Monday as traders looked past the fading geopolitical risks to the upcoming initial trade deal between the United States and China, along with what could be a promising fourth-quarter earnings season.

The U.S. and China have agreed to sign a phase-one trade deal Wednesday in an attempt to end a trade war that has rocked global markets, and the two countries are willing to engage in semiannual talks to further resolve disputes, the Wall Street Journal reports.

Tensions between the U.S. and Iran have also come to a standstill, with the global attention now focused on the accidental downing of a Ukrainian passenger flight.

“Things that have concerned the market such as the tensions between the U.S. and China, and Iran, the direction of travel is improving,” James Athey, a senior investment manager at Aberdeen Standard Investments, told the WSJ. “The path of least resistance is higher: essentially equities have gotten to the stage wherein the absence of anything bad, they will be performing pretty strongly.”

Investors’ attention is now shifted back to domestic markets where big Wall Street banks will be kicking off the quarterly earnings season on Tuesday.

“It’s one of those days when we’re setting up for that shift from macro to micro,” Art Hogan, chief market strategist at National Securities, told Reuters. “My guess is that it (bank earnings) is going to be more good news than bad news and a lot of that is driven by the kick up in demand across the board whether it’s demand from consumers or corporates.”