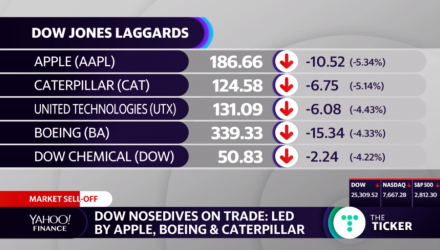 U.S. markets and stock ETFs plunged Monday after China revealed its own tariff hikes and a breakdown in trade negotiations between the two countries, fueling fears of an all-out trade war that could drag down the global economy.

“The selloff is a reflection that trade talks are in worse shape than people were expecting,” Willie Delwiche, investment strategist at Baird, told Reuters. “Investors are trying to figure out how much of the rally that we had this year was perhaps celebrating prematurely hopes of a trade deal.”

Weighing on markets Monday, China’s finance ministry stated it planned to implement tariffs ranging from 5% to 25% on 5,140 U.S. products across a range of products worth $60 billion beginning June 1 as a response to the United States raising duties last week.

U.S. products that China will charge at 25% include animal products, frozen fruits and vegetables and seasonings, the Wall Street Journal reports. Goods charged at 20% will include baking condiments, chemicals and vodka. Meanwhile, duties will remain at 5% for certain items, including vehicle parts, medical equipment and farm equipment such as tractors. Jetliners and U.S. crude, which China needs to meet domestic demand, will not be subject to barriers.

Following the announcement of the new tariffs, the State Council said that “the Chinese side hopes that the U.S. side will return to the correct track of bilateral economic and trade consultations, and work with China to move toward each other and strive to reach a mutually beneficial and win-win agreement on the basis of mutual respect.”

Bank of America Merrill analysts calculated that the new Chinese tariffs could depress S&P 500 company earnings by 1% to 3% in 2019.

The U.S. increased tariffs on $200 billion of Chinese goods last Friday and threatened to move forward on new levies for over $300 billion in remaining Chinese imports.