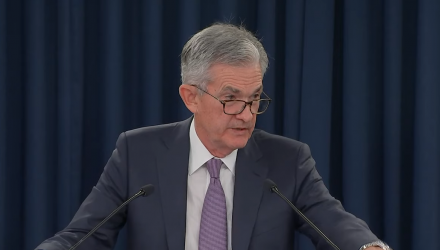 U.S. equity markets and stock ETFs faltered but tried to regain their step after the Federal Reserve cut interest rates and provided an uncertain outlook for the rest of the year.

The equity markets slipped late Wednesday after the Fed’s murky guideline on their next move, citing ongoing “uncertainties” about the outlook and pledging to “act as appropriate” to sustain the expansion, Reuters reports.

The cautious tone revealed that policymakers largely expect to stand pat on this interest rate for a while, which dampened investors’ hopes for additional cuts to bolster growth.

“The main concern (for stock investors) is there might not be another cut, and that’s why you had a little bit of a sell-off,” Alan Lancz, President of Alan B. Lancz and Associates, told Reuters. “But it’s almost like selling on good news. They left the door open for more cuts. It’s a really divided Fed right now.”

However, the stock market gradually pared the losses as Fed Chair Jerome Powell said in his postmeeting conference that he felt the U.S. economic outlook remained bright, the Wall Street Journal reports.

“I’m surprised at the extent to which the Fed is divided,” David Norris, head of U.S. credit at TwentyFour Asset Management, told the WSJ. “It tells me they’re paying attention to the domestic data, but maybe a little bit uncertain about where it’s going.”

Ongoing risks such as global growth outlook and the U.S.-trade war have weighed on confidence this year and contributed to many volatile days. Nevertheless, a loosening monetary policy out of the Fed has helped ease the pain and provided the support need for double-digit percentage gains for U.S. benchmarks.