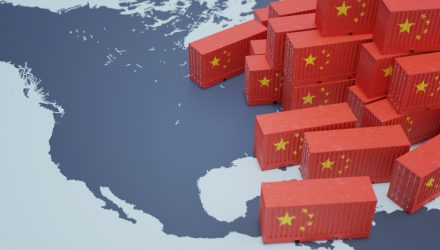 U.S. markets and stock ETFs were pushing toward new record highs Monday after an update on the U.S.-China trade negotiations revealed the two sides were nearing an agreement.

The market gains were led by trade-sensitive semiconductor stocks after a Chinese state-backed news outlet said Beijing and Washington were “very close” to an initial pact, Reuters reports.

The positive outlook also added to optimistic comments over the weekend from a top U.S. official that an agreement could still happen by year’s end, mitigating fears that the negotiations could push into 2020.

Chinese officials initiated plans to introduce penalties and punitive action for infringement of patents and copyrights, the Wall Street Journal reports. The U.S. has called for clearer assurances that China will commit to the issue, along with other points like agricultural purchases, before negotiators will travel to Beijing for a new round of talks for a “phase one” trade deal.

“People think China is willing to make concessions,” Lewis Grant, a portfolio manager at Hermès Investment Management, told the Wall Street Journal. “It shows a willingness on China’s part to come to the table and keep talking.”

“You got mergers today, which are typically positive for the market, and I think you still have some optimism that there’s going to be a trade deal,” Brown added.