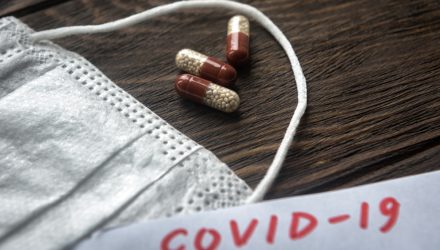 U.S. markets and stock exchange traded funds pushed higher Thursday but pared earlier gains on reports of a failed clinical trial in the development of an antiviral for the coronavirus.

“If we over-reacted last week to what looked like positive news, it’s fair to give that back when the news turns out to be not so positive,” Keith Buchanan, a portfolio manager at GLOBALT, told Reuters. “Volatility is here to stay, both up and down, on a daily basis.”

U.S. stocks also rallied earlier after the Labor Department said the weekly number of Americans applying for jobless benefits eased slightly to 4.43 million from a revised 5.24 million. However, the total in the past five weeks has surged to a record 26 million, erasing all the jobs created since the financial crisis.

“The decline in initial jobless claims is encouraging, but the damage has already been done with the insured unemployment rate surging to a record high in the (previous) week,” Paul Ashworth, chief U.S. economist at Capital Economics, told Reuters.

Meanwhile, markets have found support from further government aid as the U.S. Congress was prepping an additional $500 billion for small businesses and hospitals, which is expected to pass through the House of Representatives later in the day and President Donald Trump has promised to sign the bill.