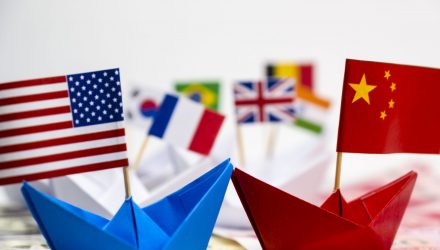 U.S. markets and stock ETFs maintained their momentum Tuesday on hopes that the U.S. and China could begin rolling back tariffs in a bid to de-escalate a protracted trade war and sign an initial truce.

Investors were hopeful that Washington and Beijing could roll back tariffs as part of the “phase one” pact before President Donald Trump could impose new tariffs scheduled for December 15, the Wall Street Journal reports.

However, the initial bullish reaction faded somewhat into the trading day after the South China Morning Post reported that China wants a firmer commitment on removing tariffs.

After a recent breakout in the market, “it’s pausing and digesting the news that it already knows, that the trade war is improving and the consumer data remains strong,” Michael Antonelli, market strategist at Baird, told the WSJ.

U.S. equities, though, has been strengthening off better-than-expected third-quarter earnings, Federal Reserve’s loose monetary policy and upbeat economic data. Both the S&P 500 and the Nasdaq closed at record highs for the second consecutive session on Monday while the Dow Jones Industrial Average touched a record high for the first time since July.

“The market reacted strongly to the economic news last week, it reached new highs and you run into a little bit of resistance and you get some weakness in healthcare,” Robert Pavlik, chief investment strategist at SlateStone Wealth LLC, told Reuters. “It causes some profit-taking and that’s all we have right now.”

The renewed optimism and accommodative monetary policies may continue to support the bull rally.

“It’s very clear we’re seeing lots of celebration in the market, not just in stocks, but in emerging market assets such as the yuan and coming out of havens like the Japanese yen,” Jane Foley, head of foreign exchange strategy at Rabobank, told the WSJ. “The rally can extend for a one to three-month view.”