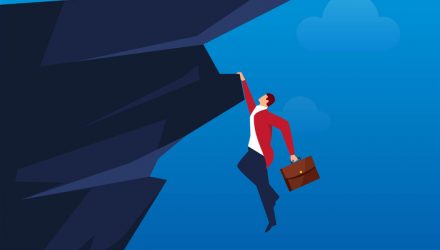 U.S. markets and stock exchange traded funds pared earlier gains toward the end of Tuesday’s session as skepticism over an end to the ongoing trade war takes hold.

Markets soured in the last half of Tuesday as risk-on sentiment shifted in face of the increased likelihood of a protracted trad war between the U.S. and China. On Monday, President Donald Trump stated he was “not yet ready” to make a deal with China, fueling speculation of a slowing global economy in the fallout, but he expected a deal could eventually be reached, Reuters reports.

“The market is trying to keep this momentum going but there is a lack of upside catalysts and there still are and I don’t know what is going to drive this higher,” Randy Frederick, vice president of trading and derivatives for Charles Schwab, told Reuters. “Any time the buyers step in, the excitement just kind of wears off and fizzles by the end of the day, and we’re seeing that again today.”

Meanwhile, investors shifted from risk-on toward more safe-haven assets, which sent yields on benchmark 10-year Treasury notes to their lowest level since October 2017 while the spread between the 10-year and 3-month bills shrunk to nearly a 12-year low.

The communication services sector was the lone S&P 500 segment still in the green in late-afternoon trade as shares of some media companies strengthened after Goldman Sachs analyst said Activision is on the cusp of an earnings inflection, upgrading the stock to a buy, the Wall Street Journal reports.

Additionally, the broader market also weakened on concerns over the health of the economy, following weakening home sales data and lower retail sales. Erik Nielsen, group chief economist at UniCredit Bank in London, pointed out that the U.S. is in the late stages of the economic cycle but the “natural cooling” of the economy expected at this time has been delayed due to the loose fiscal policy under the Trump administration and the central bank’s decision to be patient on raising interest rates.