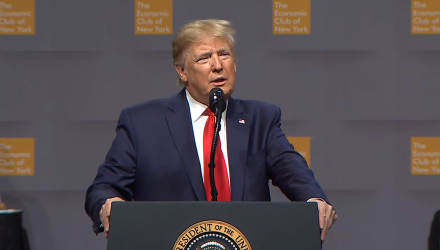 U.S. markets and stock ETFs strengthened Tuesday as President Donald Trump said the United States and China were closing in on a “phase one” trade deal but cautioned that he will still hold out if presented with an unfavorable proposal.

Observers closely watched Trump’s remarks at the Economic Club of New York for updates on the progression in trade negotiations with China, the Wall Street Journal reports. The markets have been pushing to new record heights in recent months as tensions have somewhat abated.

Michael Hewson, chief market analyst at CMC Markets, noted that markets are hopeful that no barriers will be placed on European auto makers and are waiting to see whether Trump will add another round of tariffs on Chinese goods, which is set to go into effect December 15 if negotiations fall through.

“The focus is very much on those expectations on ‘if not good news then at least the avoidance of bad news’ from Trump,” Willie Delwiche, investment strategist at Baird, told Reuters.

Looking ahead, investors will watch for Federal Reserve Chairman Jerome Powell as he heads to Capitol Hill for two days of congressional hearings on Wednesday. Powell has indicated the central bank will likely hold off on additional rate cuts after the Fed’s three rate cuts this year.