You are at:Home»Innovative ETFs Channel»Up 30% in 2021, This Golden Dragon ETF Is On Fire 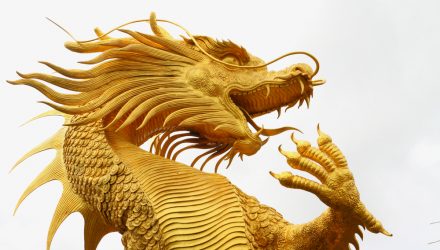 Up 30% to start the year, the Invesco Golden Dragon China ETF (PGJ) is breathing fiery gains as the world’s second largest economy looks to continue to gain momentum.

PGJ seeks to track the investment results of the NASDAQ Golden Dragon China Index. The fund generally will invest at least 90% of its total assets in the securities that comprise the underlying index.

The underlying index is composed of securities of U.S. exchange-listed companies that are headquartered or incorporated in the People’s Republic of China. Unlike some China ETFs, PGJ does a decent job of spreading exposure throughout the economy; weightings to banks and energy aren’t overwhelming, and the often-overlooked tech sector receives a significant weighting too.

PGJ is tilted towards mega cap companies for blue chip exposure, but there’s also exposure to smaller Chinese firms as well. The fund is tilted toward maximum gains given its strong performance.

Inside the Belly Of The Beast

Like any strong-performing fund, PGJ’s fiery gains are a product of its top holdings. Currently, the top three holdings, which comprise about 30% of the fund, are all strong performers and not surprisingly, in the tech industry. As China looks to become more technologically-independent, look for PGJ to keep gaining strength.

At an 8% allocation of net assets, Pinduoduo is the strongest performer with a gain of over 450% the past year. While the name may not ring bells in the U.S., in China, it’s a different story.

“Founded in 2015 by an ex-Google engineer who became a tech billionaire, the start-up has become one of China’s fastest-growing e-commerce players through its gamified group-buying promotions,” a South China Morning Post article said. “The app encourages users to bulk-buy products – especially agricultural produce – at rock-bottom prices.”

“This marks it out from competitors such as JD.com, which appeal to middle-class consumers with higher-quality products,” the article added. “The firm has a huge user base in smaller cities and rural areas. However, it has occasionally come under fire for the low quality of some products, and in recent weeks has faced scrutiny of online users for an alleged overwork culture.”