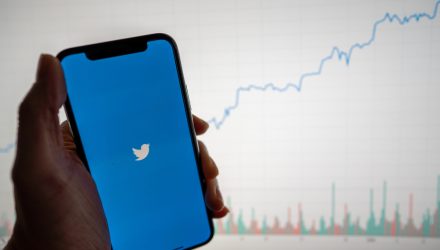 The Global X Social Media ETF (SOCL) was among the best performing non-leveraged ETFs of Wednesday, rising 3.2% as of late Wednesday afternoon.

Twitter strengthened after the social media platform said it added users through the holiday quarter and continued to attract more users in January, the Wall Street Journal reports.

The social media giant posted its second-ever $1 billion quarter on Tuesday. Company revenue jumped 28% to a record $1.29 billion, compared to estimates of $1.18 billion.

The company also said it brought in more daily users in January than the average number it added in that month for the past four years.

However, the social media company warned that user growth might slow this year compared to the early months of the coronavirus pandemic after many stuck-at-home posters began to spend more time online and on social media. Furthermore, Apple Inc.’s pending privacy changes could have a modest impact on the platform’s advertising business.

“Finally, assuming the global pandemic continues to improve and that we see modest impact from the rollout of changes associated with iOS 14, we expect total revenue to grow faster than expenses in 2021,” Twitter said in a letter to shareholders, in which the company predicted sales of between $940 million and $1.04 billion in the current first quarter, according to MarketWatch. “How much faster will depend on our execution on our direct response roadmap and macroeconomic factors.”

Twitter does not normally provide guidance on user growth but it made an exception due to unusual circumstances, notably former President Donald Trump’s suspension from the platform.

“We are a platform that is obviously much larger than any one topic or any one account,” Twitter Chief Executive Jack Dorsey said on an earnings call, adding that 80% of the company’s audience is outside the U.S. “We are also not dependent upon just news and politics being on Twitter.”

“When we lay out our principles and our policies, and we’ve enforced them transparently and consistently, we find that advertisers feel better, not worse about partnering advertising on Twitter,” Segal said.