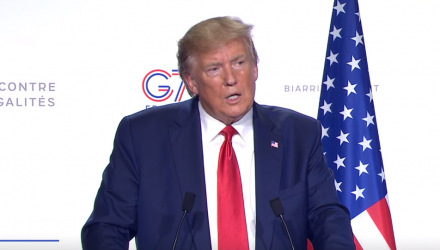 U.S. markets and stock ETFs rebounded Monday on hopes that President Donald Trump will ease his stance with China and move toward an eventual resolution to the protracted trade war.

Stocks climbed Monday after Trump said China wants to make a deal, sparking speculation that the two countries could be de-escalating trade tensions. However, market observers advised investors to take the positive developments with a grain of salt.

“If there is one thing we have learned over the last year or so is things can change very quickly,” Mike Loewengart, vice president, Investment Strategy at E*TRADE Financial Corp, told Reuters. “The sentiment is optimism on account of the hopes that there will be some progress on the trade front, coupled with some encouraging economic metrics that reinforced the strength.”

Changing stances of U.S. and China

Some analysts have warned that both the U.S. and China have at several times said progress was being made but quickly reversed their stances.

“We’ve been telling clients for some time that they should expect trade disputes to be part of the investing environment for some time,” Kathy Fisher, head of wealth and investment strategist at AB, told the Wall Street Journal. “Tweets and comments can sometimes suggest there’s something big about to happen, but we wouldn’t expect any durable resolution in the near term.”

Related: ETF Investors Stock Up on Billions of Gold in Q3

Meanwhile, economic data further added to the risk-on sentiment. The Commerce Department revealed new orders for key U.S.-made capital goods rose modestly in July while shipments dipped by the most in nearly three years, which may further bolster the case for the Federal Reserve to cut interest rates again next month.

Lingering concerns over the global economy remains a major overhang as many investors remain nervous about how long the ongoing bull expansion may last.