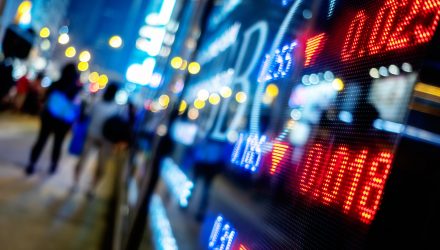 U.S. markets and stock ETFs retreated Monday on a fresh round of trade-induced, risk-off selling after President Donald Trump threatened to hike tariffs on Chinese goods this week.

President Trump stated the U.S. could increase tariffs on $200 billion in Chinese imports to 25%, up from the current 10%, as the U.S. and China begin a new round of talks this week in Washington, the Wall Street Journal reports.

Chinese delegations were prepping to travel to the U.S. for talks, and a foreign ministry spokesman underscored China’s willingness that both sides could come to an accord. However, Trump’s remarks revived concerns over tensions that would dampen the growth outlook of the global economy.

“Markets don’t like to be surprised, but we still need more time with this story because it comes with a backdrop of a super strong economy,” Michael Antonelli, market strategist at investment bank Robert W. Baird & Co told the WSJ. “I’m still willing to give it the benefit of the doubt that this could be a negotiating tactic. This is going to bring back volatility, but it’s always darkest before the dawn.”

U.S. and global markets have or more less recovered from the pullback in the previous year, and market observers attributed the rebound partially to the U.S.-China trade talks. Some contend that the latest Trump remarks may just be a ploy to get a better deal ahead of the talks in Washington.

“Obviously it was a negative start, but the market still appears confident that we will get a China trade deal and this was Trump’s art of the deal strategy,” Gary Bradshaw, portfolio manager with Hodges Funds, told Reuters. “There is a great chance for a trade deal to be reached, it’s a win-win for both sides, and I don’t think that China would walk away from it.”