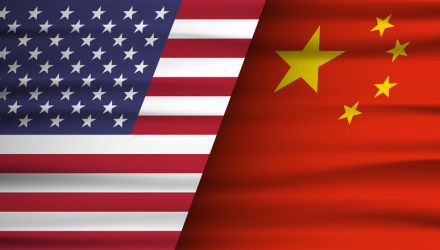 U.S. markets and stock ETFs continued to retreat as President Donald Trump’s threat of tariffs on essentially all Chinese goods clouded the outlook.

The sudden escalation in trade tensions weighed on major stock benchmarks around the world and triggered the worst one-day drop in oil prices since 2015 on growing concern over the global economic outlook, the Wall Street Journal reports.

“The heightened trade war with China is not helping the market and investor confidence,” Weston Boone, managing director of equity trading at Stifel, Nicolaus & Co., told the WSJ.

Boone also argued that the sell-off continued through Friday because of traders’ reluctance to hold stocks heading into a weekend when Trump or Chinese leadership could provide further updates about tariffs.

“We’re not seeing a whole lot of reasons for investors to buy the market right now,” Boone added.

Trump surprised markets after stating that effective Sept. 1 the U.S. will place new tariffs on $300 billion in Chinese goods, which would cover everything including smartphones, clothes, toys and other consumer products. The new trade barriers would be added on top of tariffs already placed on $250 billion in imports from China.

“The tariff threat was a splash of cold water, the market had became accustomed to the current state of U.S-China trade negotiations, but a hike in tariffs wakes you up to the fact that the trade war is still with us,” Michael Antonelli, market strategist at Robert W. Baird, told Reuters. “If the trade war rhetoric is going to continue to ramp up, then the Fed is going to have to continue to fight that with monetary policy.”