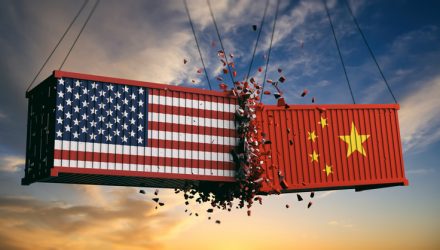 President Donald Trump said the U.S. will implement additional tariffs on China next month, fueling doubts of a quick end to the protracted trade spate between the two largest economies in the world.

Trump said he would hit China with an additional 10% tariff on $300 billion worth of Chinese imports starting September 1, Reuters reports.

“Trade talks are continuing, and during the talks the U.S. will start, on September 1st, putting a small additional Tariff of 10% on the remaining 300 Billion Dollars of goods and products coming from China into our Country. This does not include the 250 Billion Dollars already Tariffed at 25%,” Trump said in a tweet.

The U.S. president also faulted China for not following through on previous promises to buy American agricultural goods and not doing more to stop the flow of synthetic opioid fentanyl.

U.S. and Chinese negotiators just concluded two days of talks in Shanghai on Wednesday with little signs of progress, but both sides said negotiations were constructive. Another round of negotiations is scheduled for September.

The sudden trade update erased all of the early morning gains on Thursday. The equity market earlier strengthened on hopes that the Federal reserve would cut rates again in September.

“The market is starting to realize that the Fed may provide a backstop and still be accommodative on future rate cuts later this year,” Dan Heckman, national investment consultant at U.S. Bank Wealth Management, told the Wall Street Journal.

Federal-funds futures showed options traders were pricing in a 61% chance of another quarter-point rate cut in September, compared to around 49% on Wednesday, according to CME Group.