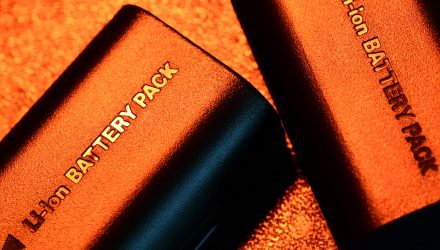 Getting more for less will attract consumers in many sectors and when it comes to energy, efficiency is a trend that should persist in 2020 and beyond. This move towards energy efficiency should favor lithium-focused exchange-traded funds (ETFs), which investors should keep their eyes on.

“What a difference a decade can make. In 2010, batteries powered our phones and computers,” a CNBC report on battery usage the past decade noted. “By the end of the decade, they are starting to power our cars and houses too. Over the last ten years, a surge in lithium-ion battery production drove down prices to the point that — for the first time in history — electric vehicles became commercially viable from the standpoint of both cost and performance. The next step, and what will define the next decade, is utility-scale storage.”

It’s certainly a stark contrast from what it was when lithium ion battery technology was introduced in the 70s.

“Lithium-ion batteries — which itself can be a catchall term — were first developed in the 1970s, and first commercialized by Sony in 1991 for the company’s handheld video recorder. They’re now found in everything from iPhones to medical devices to planes to the international space station.”

“Over the past decades, this development [lithium-ion batteries] has progressed rapidly, and we can expect many more important discoveries to come in battery technology,” the Royal Swedish Academy of Sciences said in October. “These future breakthroughs will undoubtedly lead to further improvements in our lives, not only for our convenience, but also with respect to global and local environments and, ultimately, the sustainability of our entire planet.”

Investors sensing an opportunity to buy into a possible rise in lithium prices the next decade can look to the Global X Lithium & Battery Tech ETF (NYSEArca: LIT). LIT, which is nearly nine years old, tracks the Solactive Global Lithium Index.

The underlying index is designed to measure broad-based equity market performance of global companies involved in the lithium industry. One of the oldest thematic ETFs, LIT is designed to provide exposure to “the full lithium cycle, from mining and refining the metal, through battery production,” according to Global X.