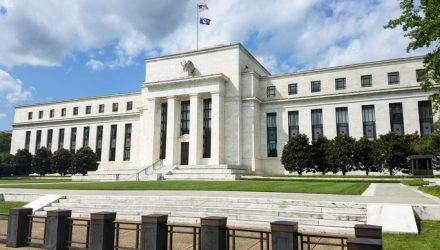 Traders Wait on the Fed for Clarity

U.S. markets and stock ETFs retreated Monday ahead of some high profile corporate earnings as traders waited on the Federal Reserve’s policy-setting meeting later this week.

“Today is the day that people will take risk off the table, so they can be flatter heading into the Fed meeting,” Michael Antonelli, market strategist at Robert W. Baird, told Reuters.

U.S. markets have recently been buoyed by hopes that the Fed would cut interest rates to counter the negative impact of a prolonged U.S.-China trade war and a slowing economy. Furthermore, a better-than-expected earnings season fueled the ongoing momentum as well.

According to Refinitiv data, 76% of the 222 S&P 500 companies that have reported earnings so far have topped profit estimates.

However, recent U.S. economic data revealed ongoing weakness, supporting bets that the Fed will take action to bolster the economy.

Traders have already priced in a quarter point interest rate cut out of the Fed on Wednesday to support the economy, and it will be up to policymakers’ comments on the next course of action to better outline whether a rally continues. The Fed’s rate-setting committee will release its policy statement at 2 p.m. EDT on Wednesday.

“The Fed is very proactive,” Xavier Baraton, global chief investment officer for fixed income at HSBC Global Asset Management, told the WSJ. “They want to engineer a soft landing and pre-empt the more tangible signs of slowdown—they feel they have the wiggle room to do that because there is no inflation.”