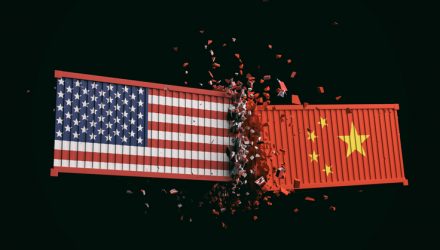 U.S. markets and stock ETFs surged Thursday after the United States and China said they will reconvene and talk trade in Washington, D.C. next month, renewing hopes for a break in the prolonged trade war.

Fueling the broad risk-on mood, Chinese and American officials plan to hold high-level trade talks in Washington early October where Beijing hopes for “substantive progress” in a bid to end a trade war that has gripped the global economy. Deputy-level officials will work together in mid-September to outline the groundwork for the meeting, the Wall Street Journal reports.

“I think there’s going to be a deal at some point” between U.S. and China, Jim Paulsen, chief investment strategist at the Leuthold Group, told the Wall Street Journal.

Some analysts, though, still sounded a word of caution and warned that a quick resolution on trade won’t likely occur and investors should be prepared for greater volatility during the negotiations.

“Hopes of a trade resolution…shine brightly. That being said, I think you have to be a little bit careful. We’ve been down this path a few times before,” JJ Kinahan, chief market strategist at TD Ameritrade, told the WSJ.

Further fueling the broad market rally, new economic data on Thursday added to market optimism. Economic activity in the nonmanufacturing sector expanded in August for the 115th consecutive month, according to the Institute for Supply Management, which helped diminish recession fears that have weighed on investors’ minds in the wake of a trade war between the world’s two largest economies.

“The most likely outcome in my view is that we’re going to give up the recession ghost by the end of the year,” Paulsen added.

Looking ahead, the Federal Reserve could be cutting interest rates again at its next policy meeting, with the street betting on a quarter of a percentage point cut, given the ongoing murky outlook.