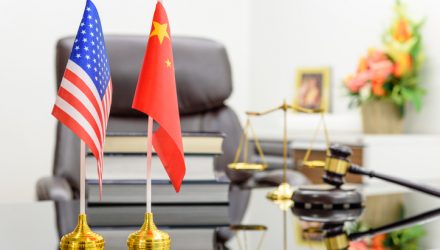 Washington and Beijing are making progress in talks to end a prolonged trade war that has hindered the global economy, with U.S. officials speculating a deal could be signed within the month, Reuters reports.

“The sentiment between the two parties has improved from the lows, so we don’t seem to be on the path of semi-permanent escalation,” James Athey, senior investment manager at Aberdeen Standard Investments, told the Wall Street Journal.

Further adding to the optimism, Commerce Secretary Wilbur Ross revealed that licenses allowing U.S. companies to sell components to China’s Huawei Technologies Co Ltd would come in “very shortly”. He also stated that the two largest economies in the world are making “good progress” on a phase-one deal.

“Signing these deals take time. All that is needed for markets to be happy right now is for an agreement to be announced,” Rick Meckler, partner at Cherry Lane Investments, told Reuters. “The earnings period was certainly enough to support current stock prices. It wasn’t good enough to lead stocks higher but not bad enough for them to go any lower.”

Market observers are optimistic that a full U.S. and China deal could be around the corner as both countries have been actively pushing to resolve tensions.

“We’re getting some confidence back in the market,” Art Hogan, chief market strategist at National Holdings, told the WSJ.

Third-quarter earnings has been mostly positive, with 76% of the 360 S&P 500 companies that have reported so far beating profit expectations, according to Refinitiv data.