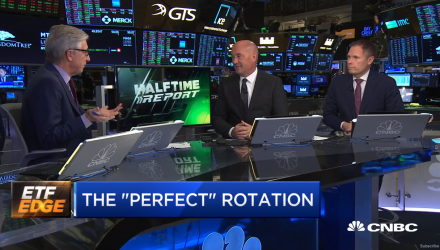 Speaking with ETF Trends CEO Tom Lydon and Invesco Global Head of ETFs Dan Draper in the segment, Pisani pointed out how value and growth are now hitting new highs at the same time. Draper believes it is due to breath in the market.

“Going back a year ago, when we were really struggling, worried about geopolitical events and market was selling off; now a year later we’ve seen a reversal in monetary policy taking effect,” Draper said. “We’re starting to see the mega caps now feeding equally into mid caps.”

Pisani noted how cyclicals started strong early in the month, only to be a bit on the weaker side now, with defensive names like healthcare and utilities now being up. He brings in Lydon, who describes this as a “Goldilocks rally.”

“When you look in value compared to growth, growth has kicked some major butt out there in the last ten years,” Lydon said. “Value, all of a sudden, is starting to have money flowing in, and also in certain fundamental factors and quality factors, value-oriented stocks are starting to get more attention in this late-cycle.”

In discussing whether it is still essential to see it as “value vs. growth,” Pisani points out Apple (AAPL) as an example of a current value stock, despite being traditionally seen as a growth stock. This has to do with the price being lower than it once was. He asks this, noting how value is now seen as banks, Walmart (WMT), and Apple, compared to stocks like Amazon (AMZN), Microsoft (MSFT).

Draper noted how there are many definitions of value based on the fragmentation over what value is. Speaking to banks and financials, a significant component of value, the yield curve plays a role.

“All of a sudden we went down below 1 1/2% 10-year treasury, now back up to 1.8, approaching 2%. That’s a better environment,” Draper explains. “So, you’re getting some macro factors and fundamentals such as energy, financial, some of these crucial sectors where value can go down.”

Lydon noted how RSP ETF has outperformed the S&P 500 for the past 16 years. With that in mind, Lydon suggested that going forward, especially given the late cycle, that investors may be able to invest with confidence.

Here What Tom Lydon Had To Say About Value vs. Growth: