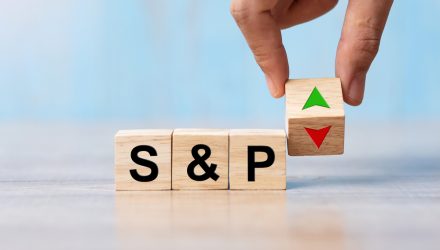 This Equal-Weight ETF Is Outpacing the S&P 500

The S&P 500 has been fluxing up and down with volatility as of late, emphasizing the benefits of an equal-weight strategy ETF with the Invesco S&P 500 Equal Weight ETF (RSP).

An equal-weight strategy helps to diversify holdings in order to eliminate concentration risk. RSP equally weights its holdings, so the ETF leans toward smaller companies with reduced concentration risk when compared to the cap-weighted benchmark S&P 500 Index.

The size factor offers the potential higher-than-benchmark returns associated with relatively smaller stocks within the universe being considered. Furthermore, investors can get this equal-weight strategy from RSP at a low 0.20% expense ratio.

“Like many Rydex products, RSP is linked to an equal-weighted index, meaning that component companies receive approximately equal allocations,” an ETF Database analysis explained. “That results in exposure that is considerably more balanced than other alternatives such as SPY, and a methodology that some investors believe will add value over the long haul.”

The disparity in performance is wider in the one-year chart. RSP and its equal-weight strategy is up almost 15% versus the S&P 500.

A History of Outperformance

“Companies worth hundreds of billions of dollars, like the largest stocks in the S&P 500, may find continued above-average growth difficult since ‘trees don’t grow to the sky’,” the report added. “Of course, there are extended periods in which the cap-weighted S&P 500 outperformed the S&P EWI. The most notable was the global financial crisis of 2008 when the safety net of a large, strong balance sheet was paramount.” 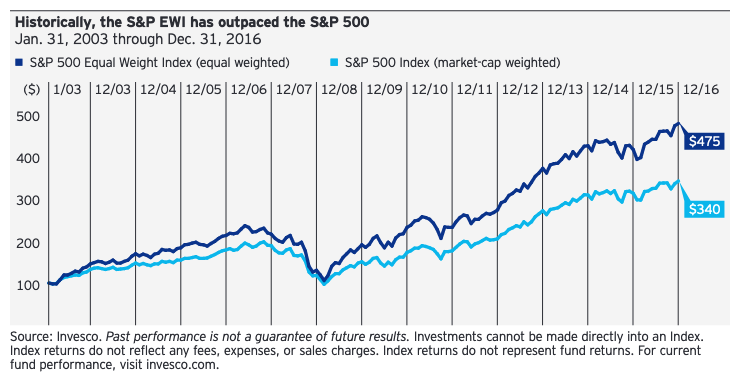