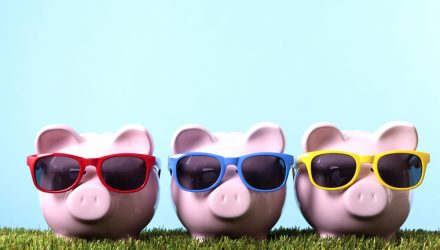 The U.S. equity rally that began in July sputtered in August 2022, ending last month in negative territory after a hawkish Fed and recession fears weighed on investors.

Wary that July’s performance was just a dead cat bounce in a bear market and not the start of a new bull run, investors flocked toward low-volatility ETFs last month. Investors also capitalized on lower valuations and heightened prospects for clean energy, propelled by the enactment of the Inflation Reduction Act — dubbed “the climate bill” by some — into law.

The most popular funds in Invesco’s suite of ETFs last month, as measured by net inflows, include the $4.9 billion Invesco NASDAQ 100 ETF (QQQM), which took in $344 million during the month, trailed by the $11 billion Invesco S&P 500 Low Volatility ETF (SPLV) and the $3 billion Invesco Solar ETF (TAN).

SPLV took in $292 million during August, with year-to-date inflows totaling $2.8 billion as of August 31, according to VettaFi.

SPLV tracks an index consisting of some of the largest U.S.-domiciled companies. As a result, investors should think of this as a play on mega- and large-cap stocks in the U.S. market. These securities are usually known as “blue chips” and are some of the most famous and profitable companies in the country, including well-known names such as ExxonMobil, Apple, IBM, and GE. The fund is probably one of the safest in the equity world, as the companies on this list are very unlikely to go under unless there is an apocalyptic event in the economy, according to VettaFi.

The fund is an ideal choice for investors seeking lower-volatility securities and positioning their portfolios for a bear market. The fund will likely outperform in a bear market and underperform broad markets in a bull market, making it a way to bet on the economic growth prospects of the country as well, according to VettaFi.

TAN took in $285 million during August; year-to-date inflows total $99 million as of August 31, according to VettaFi.

TAN delivers targeted exposure to the solar power energy, making it potentially useful for both betting on long-term adoption of this energy source or capitalizing on perceived short-term mispricings, according to VettaFi.

The fund includes 47 securities as of September 6 — including both U.S. and international stocks — with the top four names accounting for a third of assets. TAN’s hyper-targeted focus makes it most appropriate for investors looking to overweight the solar power space, according to VettaFi.