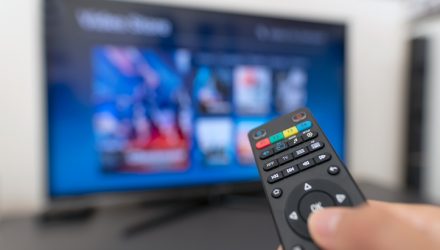 Thanks to Netflix, the Biggest Advertising Revolution Has Begun

Let me tell you a secret about the world’s most powerful stocks… ones that made early investors very, very rich.

Alphabet (GOOGL)… one of the world’s most influential tech companies… has handed investors 2,000%+ gains.

Facebook (FB)… a social media dominator and the sixth-biggest company in the world… has handed investors 400%+ gains.

These three stocks all have one secret trait that drove their stock prices to the moon.

When you think of Facebook, Google, and Amazon… you see a social network, search engine, and online store.

But in truth, all three are in the business of amassing millions of eyeballs… which they can later sell to advertisers for hundreds of millions of dollars.

While it’s too late to get in on those stocks for quick triple-digit gains, there’s one up-and-coming advertising giant, thanks to Netflix.

There’s a good chance you have its technology in your living room… but may not know it’s quietly infiltrating the advertising industry.

In fact, this stock has set out to flip the most expensive ad industry on its head and rake in billions in the process.

Remember sitting down to watch Everybody Loves Raymond at prime time on Monday nights?

For half a century, that was TV as we knew it…

But in 2007, Netflix introduced a new concept to TV: video streaming. Fast forward to today and dozens of streaming services have sprung up.

But make no mistake, TV didn’t die. It just changed its format.

According to Vox, more than 70% of people watch Netflix on TV. Instead of tuning in to cable channels, folks tune in to Apple TV, Hulu, Netflix, or other streamers.

What you may not know is that these folks need more than a subscription to watch their streaming services on TV.

The King of Modern TV

A month ago, I told you about Roku, an invisible company that powers the entire streaming industry. Since then, it has shot up 40%+! 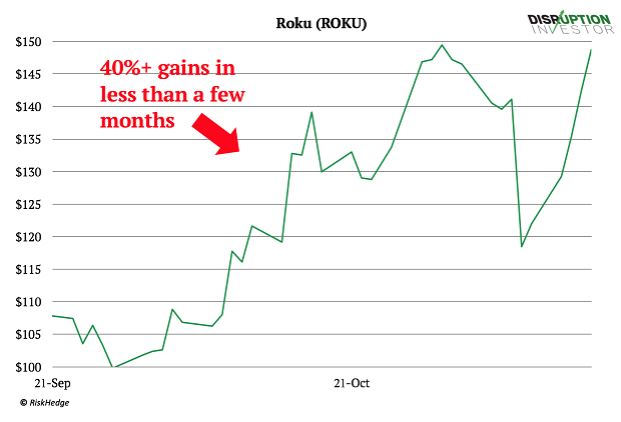 Most folks don’t know this, but Roku is no longer just a company that sells little boxes sitting outside the TV.

Today, it builds software that makes TVs “smart” and licenses it out to TV makers. In effect, it turns your TV into a computer… which allows it to connect to the internet to access streaming services like Netflix.

Without Roku, most TVs wouldn’t be able to broadcast streaming services.

Roku is now in 31 million TVs and growing. One in three smart TVs sold in the US contains Roku technology. Which means one in three folks watching Netflix or other streamers does that through Roku.

But licensing software to TV makers is not where Roku’s real money-making machine is. Roku has set its sights on disrupting TV advertising… which is going to be a multi-billion-dollar opportunity.

The most expensive… and useless… advertising industry

A 30-second TV spot during the Super Bowl cost an obscene $5.25 million…

The Super Bowl is the most expensive in terms of airtime, but TV, in general, is a ridiculously expensive way to advertise.

And most of that money ends up swirling down the drain.

While you can reach millions of people in seconds, you have little control over who sees your advertisement. It’s like throwing spaghetti against the wall to see what sticks.

They allow advertisers to pinpoint a very specific group of people to advertise to, based on what they search for on the internet… what Facebook groups they like…  what websites they browse… or what they’ve shopped for in the past.

For example, advertisers can identify women in their 40s who’ve bought cat-related products in the last six months.

That’s why this year, for the first time in history, companies will spend more on precision internet advertising than “spaghetti on the wall” ads on TV or in print.

With 31 million TV viewers under its belt, Roku has now set out to “digitalize” TV advertising and take it to a whole new level.

On one hand, you have TV. TV still has the incredible ability to reach millions of engaged people. But as I explained, it’s imprecise.

On the other hand, you have internet ads. Internet ads are precise, but they don’t have the same reach. They are often put in front of people who are mindlessly scrolling the internet… whose brains are trained to ignore ads in the margins of the pages.

Imagine if you could combine the two? If you could get precise ads in front of an engaged audience of millions? Gold mine!

Streaming advertising will combine the best of both the TV and digital advertising worlds. This could easily become the most expensive and effective advertising channel on the planet… and a big money-making machine for Roku.

Roku Could Double or Even Triple

The TV advertising industry is now worth over $70 billion.

While one out of every three hours of TV viewing happens via streaming services, streaming advertising still makes up a meager 3% of TV ad budgets, according to Nasdaq.

As streaming continues to phase out cable TV, I expect streaming ads to steal a bigger and bigger piece of the $70 billion pie from TV ads. Which means this industry has plenty of room to grow 10X, 20X, or 30X.

While Roku’s ad revenues are growing at an exponential rate, as you can see below… 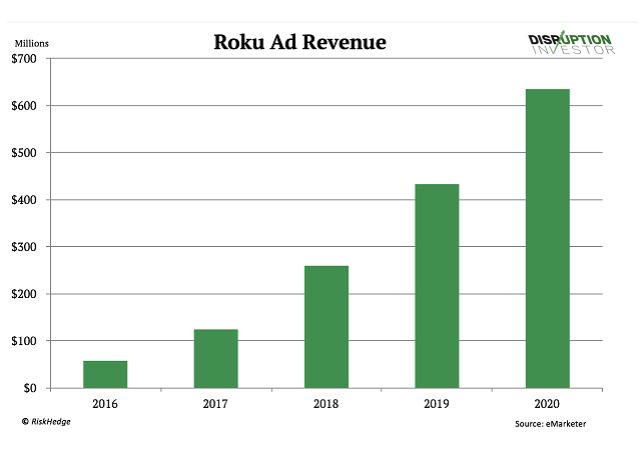 … we are still in the very early innings of the TV advertising revolution.

For those reasons, I wouldn’t be surprised if Roku’s advertising revenues grew tenfold in the next five years… handing investors triple-digit gains.