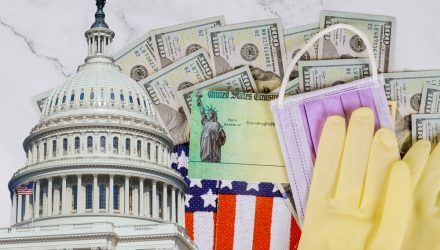 U.S. markets and stock exchange traded funds continued to strengthen on Thursday as hopes of a new coronavirus stimulus package fueled the momentum.

President Donald Trump said there were some discussions with Democrats over support for the U.S. airline industry and providing Americans with another $1,200 stimulus check, Reuters reports.

House of Representatives Speaker Nancy Pelosi has argued that aid for airlines was a matter of national security and it will have to go through Congress with guarantees of work continuing on the comprehensive deal.

“We’re clearly being pushed around by the prospect of getting further fiscal stimulus. That’s entirely the driver. It’s been going on since this summer,” Art Hogan, chief market strategist at National Securities, told Reuters. “The market is just reacting to every utterance of where we stand on fiscal policy.”

The stimulus efforts are especially promising as the economy begins to show signs of slowing down, with the latest data on Thursday revealing the number of Americans filing new claims for jobless benefits slipped last week but showed little progress in getting the millions of people back to work after being laid off due to the Covid-19 outbreak.

“It’s still all about stimulus at this point: we’re seeing markets move on optimism that some kind of package is going to get done,” Esty Dwek, head of global market strategy at Natixis Investment Managers, told the Wall Street Journal. “It’s just a question of how much the Republicans will agree to.”

Some are growing cautious about the current bull market after the speculative buying has pushed stocks to potentially overpriced levels. Consequently, some are beginning to look at other areas of the market, such as smaller companies and others with more attractive valuations.