You are at:Home»Innovative ETFs Channel»S&P 500 Plus a Dash of Tech Makes for an ETF With Explosive Gains 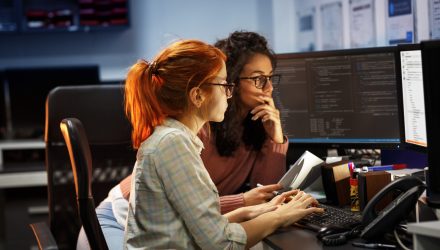 RYT is based on the S&P 500® Equal Weight Information Technology Index (Index). RYT will invest at least 90 percent of its total assets insecurities that comprise the Index, which equally weights stocks in the information technology sector of the S&P 500® Index.

Both the fund and the index are re-balanced quarterly. As for the equal weighting, the fund prevents overexposure to certain stocks that market-cap weighted funds can be subjected to–a boon when those particular holdings are experiencing upside, but a detriment when things go awry.

While it has tech giants as part of its holdings like Apple, RYT has equal doses of exposure to other companies like Nvidia, Paypal and Broadcom to name a few. One might think that underexposure to heavyweights like Apple might affect the performance of the fund, but RYT is up 21 percent year-to-date according to Morningstar performance numbers.

The tech sector, in particular, is certainly making its comeback after the fourth-quarter massacre it endured in 2018. Like all other equities, the sector has been getting some help from better-than-expected first-quarter GDP numbers published by the Commerce Department.

Like the four food groups, technology has almost become a dietary staple for investors’ portfolios. Exposure without some kind of tech exposure like RYT would be akin to avoiding protein, fats or carbohydrates during a meal.