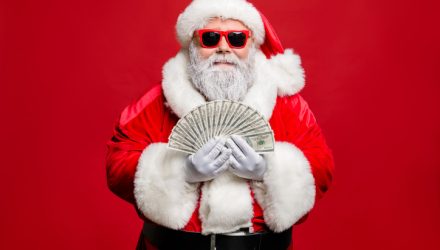 U.S. markets and stock ETFs started off the Christmas holiday-shortened week on a strong foot, pushing toward a new record on Monday.

The equity markets continued their rally toward record highs after President Donald Trump said an initial U.S.-China trade accord could be signed soon, Reuters reports.

The Phase 1 U.S.-China deal helped fuel the recent rally on Wall Street, and the momentum could be maintained on signs of improving relations between the two largest economies in the world.

Trump over the weekend said an interim trade deal would be signed “very shortly”. Additionally, China will cut tariffs on products including frozen pork, avocado and some types of semiconductors next year.

Additionally, Boeing helped bolster the blue chip index after the planemaker fired its chief executive officer, following a year of intense scrutiny and setbacks in the wake of the two fatal 737 Max jetliner crashes.

“Boeing is a tailwind for the markets for the day. It will be pretty quiet this week and probably going into year end,” Keith Gangl, portfolio manager of Gradient Investments, told Reuters. “The markets have been pretty strong year to date, and I don’t expect that to change.”

Looking ahead, traders anticipate a quite shortened week with few economic indicators to affect any major market moves, so volumes are expected to be light. Some investors also anticipate the final few days of trading in December to be relatively calm, but others are wary of whats to come after the record rally run and decade-long bull market.

“The number one comment we hear from investors is: I wish I could take some of this year’s performance and put it next year because I just don’t think next year is going to be as good,” Guy Stear, head of fixed-income research at Société Générale, told the WSJ