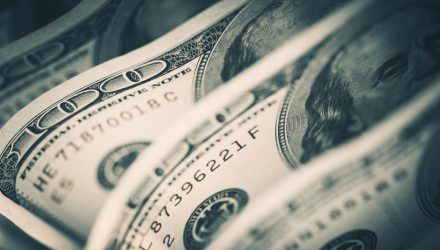 Forthcoming rate hikes could make 2022 the year of the almighty dollar after 2021 was dominated by a bullish cryptocurrency run.

Bullish dollar investors can thank the U.S. Federal Reserve for acknowledging the strength of inflation and responding with rate hikes for the new year. To go along with the hawkishness, the Omicron variant is also causing investors to seek a safe haven in the greenback.

“The dollar rose on Friday as traders retreated from riskier currencies amid talk of interest rate hikes by central bankers and concerns about the spread of Omicron cases,” CNBC reports. “The dollar index against major currencies was up nearly 0.6% in afternoon trading in New York, recouping all of the value it had lost on Thursday following a series of central bank policy statements.”

Exchange traded fund (ETF) investors looking for an opportunity can use the Invesco DB US Dollar Bullish (UUP) to capture the dollar’s upward momentum. UUP tracks the price movement of the U.S. dollar against a basket of currencies, including the European Union’s euro, the Japanese yen, the British pound, the Canadian dollar, the Swedish krona, and the Swiss franc.

It’s not all sunshine for the dollar rally, though. Bearish sentiment could spoil that picnic, giving inverse traders an opportunity to play the other side with the Invesco DB US Dollar Index Bearish Fund (UDN).

“Maybe I should stop making predictions. I’m going to say the dollar is going to zero. You should start stocking up on gasoline and milk right now. If you can prepay your healthcare and tuition bills you should probably do that right now,” said Jesse Powell, CEO of crypto exchange Kraken, in an interview with Bloomberg TV.

The fund seeks to track the index by establishing short positions in DX Contracts. DX Contracts are linked to the six underlying, or index, currencies of the U.S. Dollar Index (USDX®), or the USDX®. The index currencies are the euro, Japanese yen, British pound, Canadian dollar, Swedish krona, and Swiss franc.