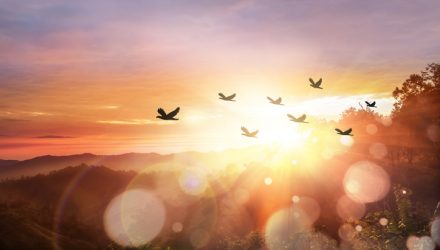 U.S. markets and stock ETFs regained their step, with the S&P 500 snapping a four-day losing streak, on rising hopes for progress in trade talks between the U.S. and China at the upcoming G20 summit.

However, the market optimism was tempered toward the latter half o the session after the Wall Street Journal reported that Chinese President Xi Jinping will present President Donald Trump with conditions the U.S. must meet before Beijing will settle on trade talks. For example, Beijing is insisting that the U.S. remove its ban on Huawei Technologies, along with punitive tariffs and efforts to force China to buy more U.S. goods than previously discussed.

“There’s a lot riding on what happens with China this week,” Robert Pavlik, chief investment strategist and senior portfolio manager of SlateStone Wealth, told the Wall Street Journal. “Because if the president returns home with no deal, and they just walk away—no handshake, no picture taking—then the market is not going to like that.”

Broad market sentiment further soured when White House economic adviser Larry Kudlow said the U.S. could add tariffs on Chinese goods after the two leaders meet this weekend at the Group of 20 summit in Japan.

Trump and Xi are widely expected to discuss a way forward on the trade dispute, tariffs and other issues when they meet.

“There seem to be a lot of cross-currents in language depending on who’s talking,” Chuck Carlson, chief executive at Horizon Investment Services, told Reuters. “The market seems to be discounting that positive is going to happen” at the G20 summit.

Nevertheless, the markets anticipated the Federal Reserve may step should the trade war escalate and conditions deteriorate further.

“The market has also been discounting that the Fed is going to cut (interest) rates,” Carlson added. “If the trade talks fall apart a part a rate cut is a fait accompli.”