You are at:Home»Innovative ETFs Channel»QQQ ETF Up 23.81% YTD as Nasdaq Reaches Closing High 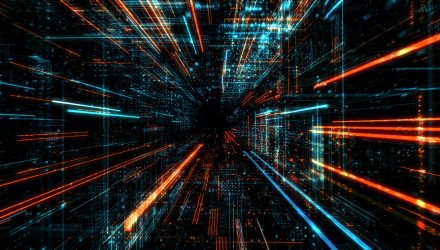 If the technology sector had to nominate an exchange-traded fund (ETF) spokesperson to represent the industry, it would no doubt be the Invesco QQQ Trust (NASDAQ: QQQ). Year-to-date, QQQ is up 23.81% as the Nasdaq Composite reached a new closing high on Monday in what’s been a retribution year thus far in U.S. equities.

The tech sector, in particular, is certainly making its comeback after the fourth-quarter massacre it endured in 2018. On Monday, the Nasdaq Composite ended the day up 0.19 percent at 8,161.85 to hit its closing high.

The markets have been getting some help from better-than-expected first-quarter GDP numbers published by the Commerce Department. Despite a number of roadblocks heading into 2019 after a rough fourth-quarter market showing to end 2018, the U.S. economy rebounded in the first quarter this year, beating analysts’ expectations of 2.5 percent growth with a 3.2 percent growth number.

Turning the Volume Up

Next to the SPDR S&P 500 ETF (NYSEArca: SPY), QQQ has been a consistent performer in terms of average daily volume (ADV):

With a 10 percent weighting in Amazon, one of its top three holdings in addition to Microsoft and Apple, QQQ digested the positive earnings of the online retailer last week.

Shares of Amazon were up as much as 1 percent in the early trading session as Wall Street digested the results, noting that earnings are trending towards less growth, but wider profit margins as it revamps its current operations and services. Revenue and web services came in line with analysts’ expectations.

One aspect of its future guidance that analysts cheered was its switch to one-day deliveries from two for its “Prime” members. It’s a move to achieve more profitability after revenue grew 16.9 percent compared to a year ago, which showed its slowest expansion since the first quarter of 2015.

“In a potentially game-changing announcement, AMZN on the call highlighted an incremental $800MM investment in 2Q19 to roll out free one-day delivery for Prime members on ~100MM items that have historically been available for free 2-day delivery,” said Cowen’s John Blackledge. “Mgmt. emphasized the rollout will be a multiquarter effort to expand footprint in the US, with global expansion to come later (though we note select markets such as UK, Germany, and France already have a free one-day offering on some items, and we expect them to expand selection over time).”

Tuned in to Tech

With a majority of its holdings dialed in to tech, QQQ could continue to see more upside as the industry’s giants look for more ways to achieve profitability and develop new streams of revenue. One area that can pit the tech giants against each other is the adoption of more cloud computing services.

“The move to the cloud continues and all the cloud providers are gaining,” said Kim Forrest, Chief Investment Officer at Bokeh Capital Partners. “Nobody is losing, it’s just some people are faster than others.”

That battle for cloud computing supremacy among the industry’s largest movers and shakers can only help QQQ for the rest of 2019 and beyond.