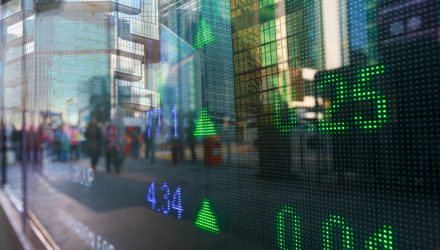 QQQ ETF Surges 2.3% on Delays for Some Tariffs

U.S. markets and stock ETFs climbed Tuesday after the Trump administration pushed off a previously planned 10% tariff on Chinese products.

Shifting away from its hardline approach to trade, the administration said it would delay increased levies on some Chinese products, including laptops, cellphones, video game consoles and certain items of footwear and clothing, which were scheduled to start next month, Reuters reports.

The announcement helped assuage fears of a prolonged trade war that has gripped the markets this year and potentially could lead to a global slowdown.

“The delay in the next round of tariffs is a positive for the tech sector and it is addressing any potential impact on the consumer as we head into year-end whether it’s back to school or holiday shopping,” Mike Loewengart, vice-president of investment strategy at E*Trade Financial, told Reuters. “It’s tough to say what the timeline of a trade deal is. All indications are that China is gearing up for a protracted dispute while expectations in the U.S. are for a much quicker resolution.”

Technology company stocks outperformed on Tuesday, with the S&P 500 information technology sector leading the charge among the S&P’s 11 sector.

Nevertheless, some analysts anticipate more short-term swings ahead and are wary that large one-day moves could be quickly reversed in coming days.

“We wouldn’t recommend investors making large positions one way or another on equities” at the moment, Jason Draho, head of Americas asset allocation at UBS Global Wealth Management, told the Wall Street Journal.