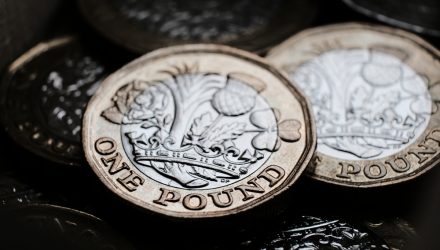 The British pound sterling currency-related exchange traded fund strengthened after the Bank of England announced a back-to-back interest rate hike for the first time since 2004.

As the global economic recovery matures amidst the ongoing pandemic, there are growing concerns of elevated inflation, and world central banks are looking at reversing the easy monetary policies previously enacted to get through the COVID-19 pandemic weakness.

“We face a trade-off between strong inflation and weakening growth,” Bank of England Gov. Andrew Bailey said, according to the Wall Street Journal.

The Bank of England hiked its key interest rate for a second consecutive meeting to 0.5%, arguing that it anticipated higher annual inflation to above 7% in the months ahead. BoE officials also warned that the Bank would begin slowly cutting down its bond holdings. Four members even voted for a more aggressive increase by 50 basis points to 0.75%.

“We have not raised interest rates today because the economy is roaring away,” Bailey said at a news conference, adding that officials acted on rates because of spiraling energy costs and surging goods prices that risk fueling higher inflationary pressures in the British economy.

“An increase in bank rate is necessary because it is unlikely that inflation will return to target without it,” Bailey said, referring to the BOE’s benchmark rate.

The BoE rate increase comes off a rate rise in December after the Bank raised its main interest rate to 0.25% from its historic low of 0.1%.

This was the first time the BoE hiked rates at back-to-back meetings since 2004, which “suggests there is concern amongst policy makers about the possibility of inflation expectations becoming dis-anchored,” Paul Hollingsworth, chief European economist at BNP Paribas Markets 360, told the WSJ. “Once the inflation genie is out of the bottle it’s quite hard to rebottle it.”