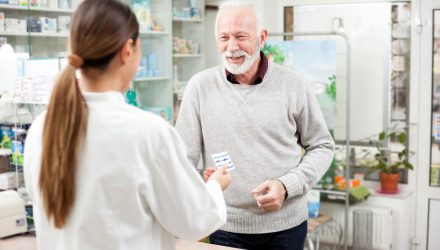 The retreat in healthcare stocks is bleeding over, with areas like pharmaceutical sector exchange traded funds being dragged down by association.

Pulling on the pharma segment, Pfizer (NYSE: PFE) decreased 1.5% and Merck & Co (NYSE: MRK) declined 1.0% on Thursday, with each both dropping off more than 2% at their lowest points earlier in the day. IHE includes a 21.1% tilt toward PFE and a 4.1% position in MRK.

“Clearly, huge stock impacts to HCA and managed care can’t be ignored and ‘collateral damage’ to sub-sectors like biopharma in the following days are reflective of a view that mutual funds are drawing down and souring” on health care, Jefferies analyst Michael Yee wrote in a note, according to Bloomberg.

The broad healthcare rout comes as competing policy proposals in Congress, including a move to replace private medical benefits with a government-backed single payer system or so-called “Medicare for All,” clouds the industry.

Deeply indebted companies and those that produce medicines heavily used by Medicare recipients or subject to rebating are most exposed to the sudden selling pressure, Wells Fargo’s David Maris said. Meanwhile, the strategist argued that Smaller generic companies or those with cash pay products should be more insulated from the overarching sector concerns, albeit so far “that has not been the case.”

Evercore ISI analyst Umer Raffat also argued investors should find solace that the high costs under the recent proposals out of Congress such as Medicare-for-All would make it hard for these plans to quickly take off.

“Sure – you can’t argue with the tide on drug pricing into elections next year – and perhaps that’s effectively what is driving the stock moves,” Raffat wrote in a note. “But I seriously question how practical some of the proposals are.”