You are at:Home»Innovative ETFs Channel»Pay Day in Cryptocurrency? Facebook Employees Will Have That Option 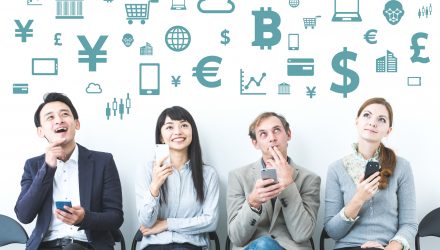 Pay Day in Cryptocurrency? Facebook Employees Will Have That Option

Instead of checking their banks to ensure their direct deposit went through, Facebook employees could open their cryptocurrency wallets on pay day as the social media giant will be rolling out its own digital currency soon.

An ETF for Financial Technology

Though cryptocurrencies operate on a different plane, financial technology that focuses on payments is an area where investors can seek opportunities. One fund to look at is the ARK Fintech Innovation ETF (ARKF)–an ETF that capitalizes on the burgeoning fintech industry.

“Fintech reimagines the generation, transfer, and storage of value in today’s increasingly digital economy, and its impact will extend across every industry. Through facilitating peer-to-peer transfers, gifting, intermediary products, and other non-GDP related economic activity, the companies in ARKF, in our view, will touch more than the $80 trillion in GDP today,” Wood added.

ARK has become a global investment manager, advising or sub-advising funds and separate accounts across four continents, including North America Asia, Australia, and Europe. The firm offers a range of investment vehicles including ETFs, institutional and retail separately managed accounts, US and international mutual funds, and a UCITS fund.

“Launching ARKF was a natural progression that builds on the success of our sub-advised fintech mutual fund with Nikko Asset Management in Japan, which received the Morningstar Fund of the Year 2017 Global Equity Award,” stated ARK’s Chief Operating Officer, Tom Staudt. “We believe all investors, both retail and institutional, should have access to investment opportunities in disruptive innovation and are excited that ARKF will fill a hole in US public equity markets for an actively managed, research-based fintech fund.”