A new wave of stimulus payments is hitting people’s mailboxes. But they’re NOT coming in the form of checks. Instead, millions of Americans are now receiving pre-paid debit cards.

That’s right. The Treasury Department is sending out around 4 million debit cards to people who haven’t provided their banking information to the IRS. The pre-paid cards look like this: 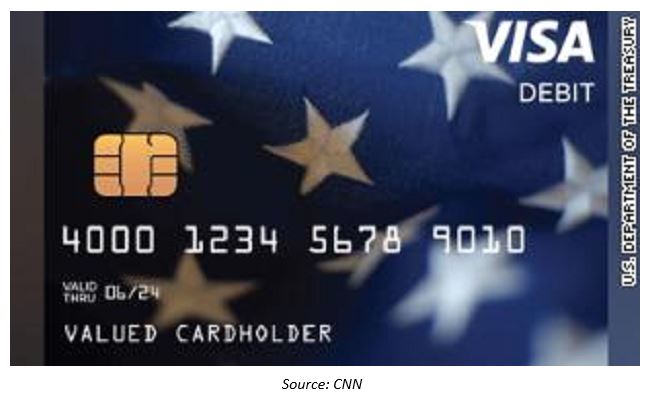 The Treasury’s calling them Economic Impact Payment (EIP) cards. But look at the top right corner. These are Visa (V) cards. And they’re the latest proof of what I’ve been saying all along: this is the end of the bank. And another reason to bet on the true financial disruptors, like Visa and Mastercard (MA).

Visa and Mastercard Are the Ultimate “Tollbooth” Stocks

It hardly matters what bank you use. At the end of the day, your card likely needs Visa or Mastercard’s payment network to function. It’s not a coincidence every one of these new EIP cards have Visa’s logo plastered on them! Over 80 million stores accept Visa or Mastercard. With one of their cards in your wallet, you can buy stuff anywhere in the world.

Visa and Mastercard have effectively created a universally accepted money—a “global currency.” $13 trillion flowed through their networks last year. They make money by taking a small cut of each transaction, like a tollbooth on a highway. Both Visa and Mastercard are minting record profits, and their stocks have handed investors tremendous gains: 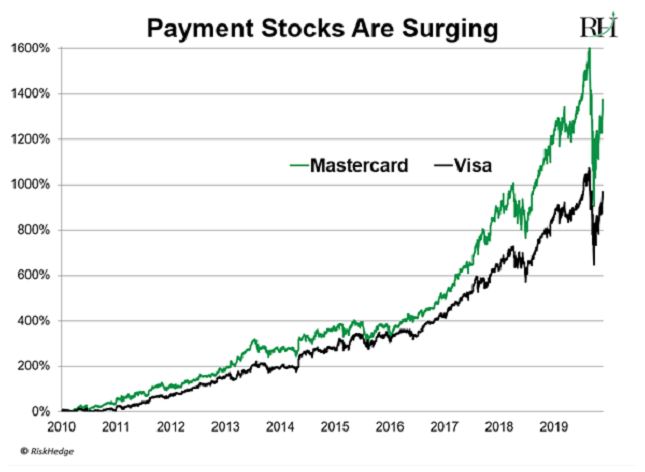 These Disruptors Will End Banks as We Know Them

Banks’ stranglehold on money is weakening. For many decades, we’ve had to deal with banks to move money. If you wanted to cash your paycheck, wire money, or get a credit card, you often had to talk to a banker. These days, you can do all these things without ever setting foot inside a bank. You can even get a mortgage without ever talking to a human banker!

Sending money no longer means writing a check and waiting three days for it to clear. Now you can send and receive money instantly with PayPal’s (PYPL) Venmo. Roughly 50 million Americans use Venmo every month. You can even pay your taxes with PayPal.

Have you ever used Square’s (SQ) little white box that swipes credit cards? It plugs into your smartphone to turn it into a cash register. Over two million small businesses use it to accept cards instead of cash.

And getting a credit card no longer requires filling out piles of paperwork and answering a banker’s questions. Smartphone giant Apple (AAPL) made a splash when it debuted its shiny new titanium credit card last August.

As I said, these disruptors will be the final nail in the coffin for tired old banks. Nobody cares if banks have fancy lobbies with marble floors these days. Most Americans just want a fast and convenient way to manage their money. I haven’t set foot in a bank in years. And foot traffic into branches has fallen close to 50% in the past decade. Many folks assume “old” money companies like Visa and Mastercard are in trouble too. These folks are wrong.

Apple designed its titanium card to resemble its sleek products. But did you know it runs on Mastercard’s network? You can see the Mastercard logo etched into it here: 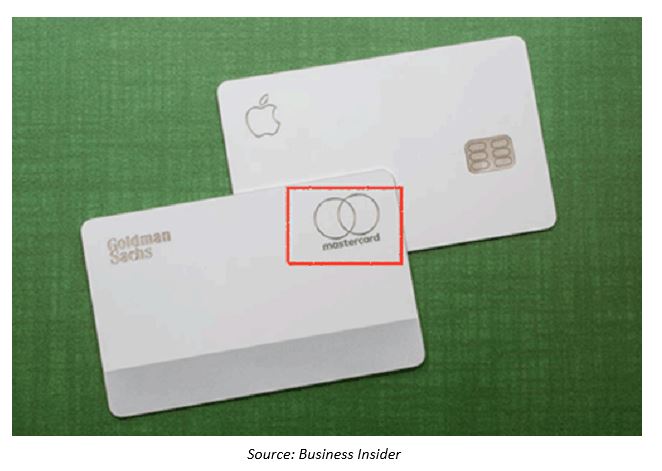 And credit cards from PayPal… Square… and Stripe all have Visa or Mastercard logos:

These disruptors aren’t ripping out the pipes of our financial system and trying to cut out Visa and Mastercard. Instead, they’re partnering with them, sending even more money flowing through their networks.

Nobody Can Touch These “Undisruptible” Stocks

How we move money around and pay for things has changed for good. Yet these changes have only cemented Visa and Mastercard’s dominance.

They’ve built payment networks nobody can match. More than 30,000 banks use their credit cards. There are 3.4 billion Visa cards alone in circulation! And now partnerships with PayPal, Square, and others are injecting a new wave of growth into Visa and Mastercard. Visa’s sales shot up 11.5% last year to a record $22 billion. And Mastercard’s revenue jumped 20% to $14.5 billion.

They are two of the most consistently impressive businesses I’ve ever analyzed. If you’re investing for the long haul, you could do a lot worse than owning these two undisruptible tollbooth stocks.