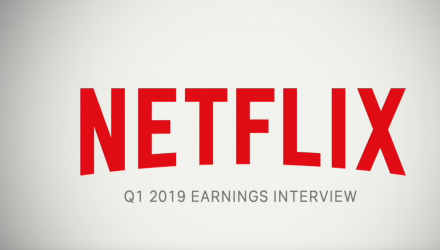 Shares of Netflix were up as much as 2 percent at Wednesday’s open after the online streaming company bested Wall Street expectations on earnings, revenue and subscribership for the first quarter.

Netflix did address the entrance of new competitors to the streaming space with Apple and Disney joining the fray.

“We don’t anticipate that these new entrants will materially affect our growth because the transition from linear to on demand entertainment is so massive and because of the differing nature of our content offerings,” Netflix wrote. “We believe there is vast demand for watching great TV and movies and Netflix only satisfies a small portion of that demand.”

Lighter guidance for the second quarter may have put some investors on pause, but some analysts quelled any fears of future revenue growth decreasing.

“NFLX’s first quarter earnings may be controversial to some — mostly because of the light second quarter (subscription) outlook — but we think there’s much more to like here than not,” J.P. Morgan analyst Doug Anmuth wrote in a note following the report. “We continue to believe that Disney+ will not be a major threat to NFLX subscriber numbers given NFLX’s quality & quantity of content, & that Netflix/Disney+ will not be an either/or decision.”

Here’s how the ETFs with the largest Netflix holdings reacted:

FNG was down 2.35 percent as of 10:15 a.m. ET. FNG is actively-managed and invests 80 percent of its assets into tech and media companies. It has a Netflix exposure of 13.63 percent.

PNQI was down 0.49 percent in early trading. PNQI’s objective is to track the investment results of the NASDAQ Internet IndexSM. Its Netflix exposure is 7.56 percent.

FDN fell 0.77 percent in the early session. FDN’s goal is to seek results that correlate to the price and yield of the Dow Jones Internet Composite Index. Its exposure to Netflix is 5.46 percent.