You are at:Home»Innovative ETFs Channel»Munis Hit $100 Billion in Net Inflows from January to May 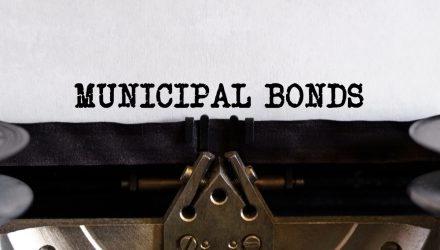 Munis Hit $100 Billion in Net Inflows from January to May

The appetite for municipal bond exchange traded funds (ETFs) has been readily apparent, with the start of the year through May bringing in over $100 billion in net inflows, further fueling funds like the Invesco National AMT-Free Municipal Bond ETF (PZA).

“More than a dozen municipal bond ETFs each gathered over $100 million of net inflows year-to-date through May 2021 highlighting the diversity of popular offerings,” CFRA Research noted in an email. “The sub-category gathered $8.6 billion of new money and is on pace to exceed 2020’s flows.”

PZA seeks to track the investment results of the ICE BofAML National Long-Term Core Plus Municipal Securities Index. The fund generally will invest at least 80% of its total assets in the components of the index.

The index is composed of U.S. dollar-denominated, tax-exempt municipal debt publicly issued by U.S. states and territories and their political subdivisions in the U.S. domestic market. PZA’s expense ratio comes in at 0.28%.

A “Food Fight” in the Muni Space

While municipal bonds may not have the risk appeal of high-yield debt, investors remain interested. An influx of investor capital came as U.S. president Joe Biden presented his massive infrastructure plan, which would require state and local debt funding.

“The U.S. municipal bond market is known for being many things: staid, stuffy, well-suited to capital preservation, if not growthy opportunity,” a MarketWatch article said. “But now, lopsided metrics of supply and demand, with no relief in sight, suggest it might be outright shrinking.”

The article also noted: “Investors have poured record amounts of money into muni funds, even as a series of events have conspired to keep state and local government entities from issuing enough debt to satisfy investors. Some corners of the market are so tight that funds are turning money away, noted Brian Steeves, portfolio manager for Rye Brook, New York-based Belle Haven Investments.”

How long this proverbial food fight can last remains to be seen. For now, municipal bonds have been the toast of the town in the debt market.

“Bankers and buyers may both see less activity than needed, the influx of Federal cash and surging state and local revenues cut borrowers’ needs for working capital,” wrote analysts at Municipal Market Analytics in a June 7 note. “State and local governments, which are not yet showing a strong rebound in hiring, are also likely a few quarters away from restarting traditional new money infrastructure plans in earnest.”