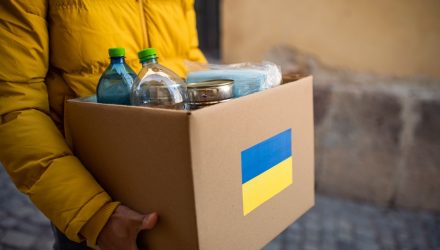 With the Russian invasion of Ukraine approaching its eighth month, the Biden Administration and its Congressional allies are considering another injection of military assistance for Ukraine – which may prompt investors to consider defense industry ETFs like the Invesco Aerospace & Defense ETF (PPA).

Midterm elections are just over two weeks away, and while expected gains for the GOP would normally signal a hawkish mindset that might augur more defense spending, a growing contingent of Republican candidates are instead reverting to an isolationist, pro-Russia mindset that threatens Ukraine aid. The United States has already provided more money and weapons to the Ukrainian military than it sent in 2020 to Afghanistan, Israel, and Egypt combined.

As such, a bipartisan effort is set to lock in one more large package for the beleaguered Eastern European nation to prepare itself for a refreshed Russian offensive in the Spring. The total package being considered would be significantly larger than the $12 billion approved in September, which may boost defense industry ETFs like PPA.

Outside of Ukraine, PPA could also grow due to the knock-on instability caused by Russia’s reduced focus on the other former Soviet republics and ongoing worries that China might take advantage of the global focus on Eastern Europe and take some form of military action concerning Taiwan. The United States itself recently completed military drills in the nearby South China Sea.

PPA tracks the SPADE Defense Index, investing in mid-cap equities in the aerospace and defense sector industrials. Industrials have been a relatively stable option in recent weeks amid rising rate-imposed uncertainty, a slow-growing but steady option that stands to benefit from expanded military spending.

PPA charges a 61 basis point fee, seeing returns of 9.2% over the last month and 2.3% over the last three months, outperforming the ETF Database Category Average and Factset Segment Average. PPA has received $36.6 million over the previous month, a severe defense industry ETF option to consider.